How to Grow Columbine & Care Guide

For much of the year, you can enjoy the beauty of the columbine (Aquilegia), an easy-to-care-for perennial.

Horticulturists use bell-shaped flowers for cut-flower arrangements because hummingbirds love them as much as we do.

How to Grow Columbines

Soil that drains well and isn’t too dry is all that matters to columbine plants. While they enjoy full sun in most areas, they prefer cooler temperatures in the summer.

This is why they do best in partial shade and with a lot of mulch when you live somewhere hot like the south.

As in other climates, mulch will help insulate and protect plants.

If you start with a seed, you’ll have a colony in no time. To grow columbine, simply scatter the seeds around your yard from early spring to mid-summer.

As long as they get plenty of sunlight, there is no need to even cover them.

At the same time, plant all of the pre-established plants in the ground, with the crowns at the soil level.

Seeds and plants need to be spaced out by 1 to 2 feet (.3 to .6 m.). For seed-grown plants, blooms won’t appear until their second year.

How to Care for Columbine Plant

After planting columbine, keep the plants watered until they are well established.

Then they only need to be watered once a week, except during periods of extreme drought, in which they will need more watering.

Every month, apply a water-soluble fertilizer. Blooms will be more vibrant and foliage will be denser with regular fertilization.

Additionally, regular deadheading can be done in order to encourage more blooming.

The foliage and any remaining seedpods can be trimmed back in the fall if self-seeding becomes a problem.

However, because columbine plants have a relatively short lifespan of three to four years, it is often recommended that you let them self-sow.

It is possible to divide these plants every few years if desired. Leaf miners can be a problem for columbine, but this is a rare occurrence.

Using neem oil on plants can help keep these pests at bay. Insect pests can often be reduced to a minimum by pruning columbine plants back to the basal foliage as soon as they have bloomed.

It’s possible that you’ll get a second set of stem growth in just a few weeks, allowing you to enjoy another wave of blooms.

Pruning columbine plants after they’ve finished blooming is a good idea. In a few weeks, you may see a second set of stems grow, allowing you to enjoy a second wave of blooms.

It is possible to keep the plant attractive and green for the rest of the summer by cutting it back by half after it has finished flowering.

Sowing seeds or dividing Columbine is the best way to propagate the plant. Early spring and summer are ideal times to plant columbine seeds.

Every two or three years, Columbine can be divided. For many years after it is divided, a plant retains its vitality and vigour.

If you must divide a Columbine, be sure to dig deep. As an example, consider this:

How to Grow Columbine From Seed

Columbine can easily be grown from seed, which is the simplest method.

Harvest the ripened seed pods that remain after the flowers have faded and dried, then break them open to collect the shiny black seeds that are inside.

Over the winter, keep them in the refrigerator. Preparation for sowing is ensured by the three to four weeks of cold time required before germinating.

The following spring, sow them in the garden as a vegetable or flower bed.

Alternatively, you can allow your columbines to self-seed by not removing the spent blooms with a garden hose.

Place one to two columbine seeds on top of the soil mix and lightly cover with additional soil, if you are starting the seeds indoors.

Set them up in a bright area. In three to four weeks, the seedlings will begin to appear.

The plants should be gradually hardened off before being planted outdoors at a distance of ten inches apart when they are three to four inches tall.

Each seedling should be placed in a ten-inch-wide container. Plastic, clay, wood, or stone containers are acceptable as long as they have drainage holes in the bottom. Potting soil of high quality and good drainage should be used to fill each container.

When it’s cold outside, Columbines are fine. Remove any wilted columbine foliage and cut the columbine stalks to the ground at the end of the growing season.

The flower stalks and any new plants that have successfully self-seeded will reappear in the spring.

Mulch or decaying leaves around the plant’s crown will provide additional protection from the cold of winter.

Miner “doodles” are common on columbine foliage, but the damage is usually not severe, and the foliage has a somewhat “variegated” appearance that some gardeners find appealing.

Check the leaves for larvae and crush them with your fingers when you see the first signs of scribblings.

If you see any signs of mining, you can also go out and gather leaves by hand.

Additionally, columbine aphids2 and columbine sawflies3 can be common pests.

While aphids can stunt growth, sawflies can defoliate plants. You can use ultra-fine horticultural oil or insecticide soap to control aphids and sawflies.

Columbine can be affected by fungal diseases such as grey mould and powdery mildew4. To prevent the growth of grey mould, get rid of faded flowers.

Apply a fungicide if you notice symptoms like white mildew or a fuzzy grey mould.

How to Get Columbine to Bloom

During the spring and early summer months, columbine plants bloom.

Rocky Mountain columbine (Aquilegia caerulea), on the other hand, has a distinct sweet scent that most columbine varieties lack.

Pinching spent flowers back to just above a bud will prolong the bloom period of columbine.

If you don’t remove spent blooms, the seeds they produce drain the plants of energy.

To grow columbine plants at home, you don’t need a lot of space.

Insects and fungal infections can cause problems, just like any other plant in the garden.

During hot or dry summers, the leaves of columbine can turn yellow and fall off the plant.

The plant may be able to survive if the soil is kept evenly moist.

To save the plant, remove all but the basal leaves if it becomes yellowed or dies from excessive heat.

The plant is still alive. It may not return until the following spring, but it has been known to reappear as early as the fall before.

Spots of pure white powder cover the leaves when they are infected with powdery mildew.

During periods of high humidity, when temperatures are warm and nights are cool, it can take over an entire plant.

Splashing water and the wind spread the fungus to other plants. Powdery mildew can be difficult to get rid of once it’s established.

As soon as you notice symptoms, use a fungicide on the infected plant and follow the application instructions on the product label. 5

The leaves of a columbine plant can be gone in a matter of days. Slugs may be to blame for the defoliation seen in this area.

Slugs are more active at night. Serve beer or an upside-down melon skin as bait. The slugs will be drawn to both of these things.

You can throw away the slug-infested melon rind after they drown in the beer.

Spread diatomaceous earth around the roots of your plants as an alternative method. That barrier will keep the slugs out. 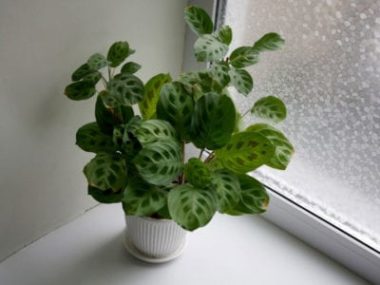 Read More
Table of Contents Hide How to Grow a Prayer PlantPrayer Plant PropagationShould I mist my prayer plant?Why does…
Read More 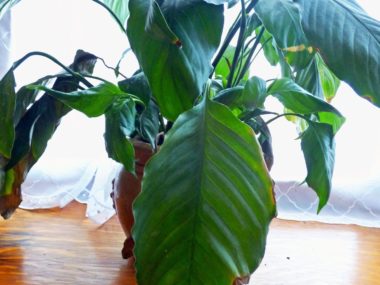